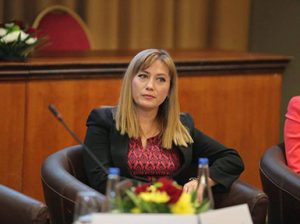 Marija Risteska holds a PhD in political science, has experience in teaching public policy and has worked in a capacity of policy researcher, analyst and adviser of central and local level government since 2006. Risteska has written textbook: “Public policy, policy making and public value (2017)”. Her specialization is in gender mainstreaming in policy, budgets and projects. Her capacity has been built by UNWOMEN, but Risteska worked as gender consultant for ILO, EC, OSCE, UNDP, COE and GIZ/FAO. Risteska developed capacity building programs and delivered mentoring in gender responsive budgeting to central and local level government officials and civil society organizations. Marija contributed to the IMF Vienna institute GRB course and is a co-author of the Textbook for Universities “Gender Responsive Budgeting (2013). Currently Risteska is acting as Regional Director of the Gender Budget Watchdog Network of CSOs from Albania, Bosnia and Herzegovina, Montenegro, North Macedonia, Kosovo, Serbia and Moldova; and works as an International Gender expert on the Women in Government initiative of USAID in Eastern Ukraine. Marija Risteska has authored numerous policy studies and documents such as Strategies and programs that apply or are developed based on gender mainstreaming methodologies. 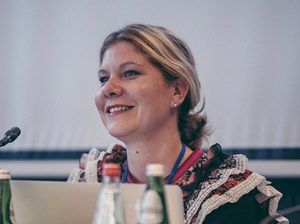 Mirela Arqimandriti has more than 20 years’ experience in the field of women’s rights, gender-based violence and advancement of gender equality in Albanian society. As gender expert and director of Gender Alliance for Development Centre she implemented dozens of projects and organized many activities dedicated to gender-based violence, women’s labour rights, gender responsive budgeting, gender mainstreaming and analysis. Mirela is a researcher and gender analyst, with significant contribution to the establishment of the Community Coordinated Response (CCR) against Domestic Violence in 5 municipalities in Albania. She also has developed a monitoring methodology of the Strategic Objective 3 dedicated to the fight against Gender Based Violence of the National Strategy for Gender Equality 2016-2020 in Albania, monitoring through 9 municipalities and published reports of monitoring for the public and other stakeholders. She is trainer of feminist and gender equality and coach of many women’s rights organizations. She has developed different sectoral based gender analysis, analysed gender dimensions, promoted and protected women rights in the labour market through research, awareness rising, capacity building activities, networking, lobbying and advocacy. In addition to the women’s labour rights she is developing a methodology to improve women’s position in the labour market through empowering a group of girls and women working in shoes and textile industry (fasoneria) from urban and peri urban areas in eight municipalities, with knowledge on rights in the labour market through providing training and know-how on access to labour market, Labour Code and gender-based discrimination. She is co-founder of 3 civil society organizations which are acting as networks for women’s empowerment (AWEN), for monitoring the local life of men and women and municipality accountability (POP) and for free and fair elections and gender quota (KZLN). All three with a successful track of projects implementation. She is the gender analyst of the European Union Technical Assistance for the Gender Equality Agenda in Albania and gender consultant near the Council of Europe for gender mainstreaming and training development. Mirela is the author of different gender sectoral analysis. She applies a statistical based approach in different research studies to support findings and recommendations during the monitoring of the implementation of gender equality legal framework in Albania and the functioning of gender machinery. In regards to the recent studies, she is co-author of the manual “How to Respond to Domestic Violence with a special focus to the Albanian State Police, Intimate Partner Violence in Adolescence in Albania, Gender Based Discrimination and Labour in Albania, Monitoring Primary Health Care Centres in 5 municipalities, in Albania. She is a feminist, women’s rights activist and the founder of the first feminist library in Albania in 2015, with 2.000 titles of international feminist books. She is continuing the PhD degree on Family and Community Studies and has a master degree in Gender, Poverty and Employment and a master degree in Business Administration. 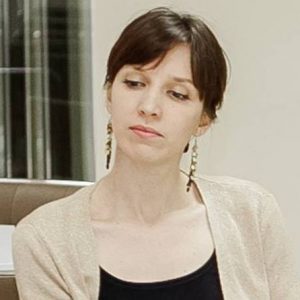 Natalia Cojocaru has proven expertise in human rights legislation and policy development in the Republic of Moldova, with a specific focus on disability. Since 2015, Natalia has worked on mainstreaming gender equality in the development projects. As part of her professional experience, she has worked on women empowerment through training and mentoring to increase their participation in the decision-making processes at different levels. In the last 3 years, Cojocaru has started to implement gender responsive budgeting in Moldova. She has knowledge and experience in using gender analysis and is involved in gender watchdog reports development. Natalia Cojocaru is a coordinator for Moldova under the regional Gender Budget Watchdog Network project. 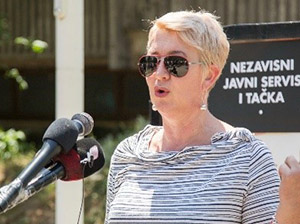 Slavica Striković has graduated with a degree from the Electro- technical faculty on University of Montenegro and holds MA on Gender Studies, from the Faculty of Humanities, University of Donja Gorica. she was part of the WNGO Women Action until its establishing, since 2000, where now she is an executive director. She is certificated trainer in: Gender Budgeting, organized by UNIFEM; Trainers and communication skills, organized by Norwegian Peoples Aid; Gender Studies, organized by Ministry of Justice, Montenegro; Citizen participation in decision making process, organized by EU; and Managing of EU projects, organized by DEU in Sarajevo. She has multiyear organizing experience in international conferences, seminars, educational meetings, public presentations of publications, magazines and documents on Gender and other issues; complex sociological and statistic researches on women’s population in Montenegro, etc. Her professional membership is consisted of: 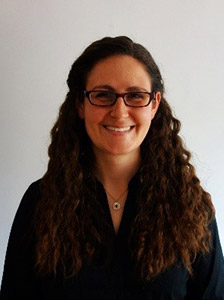 A U.S. and a Kosovo citizen, Nicole Farnsworth has lived and worked in Kosovo for 17 years, primarily with the Kosovo Women’s Network (KWN) where she presently serves as Program Director and Lead Researcher. A sociologist researcher (MSc, London School of Economics), writer, and gender equality activist, she has led research and (co)authored 24 publications on gender equality, gender-responsive budgeting, gender-based violence, and integrating a gender perspective in the EU Accession process. Several have influenced legal and policy changes. She has provided dozens of trainings and tailored mentoring to government organisations at local and central levels in Kosovo, supporting them in introducing gender-responsive budgeting. She also has supported the Ministry of Finance in designing guidance in budget circulars for gender-responsive budgeting, as well as created curricula on this theme for the Kosovo Institute for Public Administration. Since 2016, she has served as Team Leader, advising the EU Office in Kosovo in gender analysis, gender mainstreaming of EU programming and implementation of the EU Gender Action Plan II. Nicole also consults regularly, worldwide, for various international organizations on gender analysis, gender mainstreaming, advocacy techniques, and civil society support.

Nerina Guri has worked with gender responsive budgeting (GRB) since 2016 at KWN. She has collected and analysed gender-disaggregated data from relevant institutions in Kosovo, and mentored public officials in GRB, including mainstreaming gender in public policies. She has co-authored several KWN publications on GRB in ministries of trade and industry, environment and spatial planning, diaspora, agriculture, forestry and rural development. As part of this work, she has assisted the ministries and municipalities in implementing their legal obligations on GRB through incremental change. Nerina has a BA from the Faculty of Economics at the University of Prishtina and a MSc in Gender, Development and Globalisation from LSE. 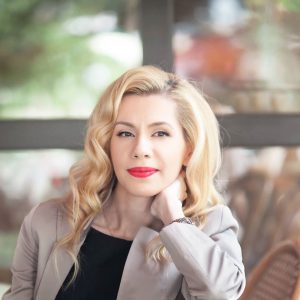 Natalia Vozian is an experienced and multilingual Public Policy and Gender Consultant. In the last 9 years, she has worked across multiple projects and gender equality consultancy areas, including EVAW, GRB and GM in leading global companies and UN organizations. With EMBA from University of Sheffield and certification from INSEAD, International Gender Diversity Program, she has delivered more than 25 national and global mid to complex scale projects and have supported Governments to draft and implement strategic public policies, services and budgets for achieving socio-economic sustainability and gender equality. As part of her professional activity, Natalia has co-developed National Strategy on Ensuring Gender Equality between Men and Women in Republic for Moldova, area GRB and EVAW and the first National Strategy in Preventing and Combating Violence against women and children. She has a supported Ministry of Finance and Ministry of Labor in implementing GRB at the national level. As well she has contributed to building and strengthening the GRB expertise among local NGOs and have co-created the Regional GRB Watchdog Network (Albania, Serbia, Macedonia and Moldova). She is the author of several guides on application of social innovation in EVAW and migration. She has co-author of a gender equality guide for young people and community at general. She has extensive knowledge and experience in using gender analysis and gender mainstreaming in different socio-economic areas, including: migration, labor, children protection. Working with people from different cultures and regions, she has extensive practice in collaborating and communicating with virtual, on site and matrix structured teams and stakeholders, seeking always to find win-win solutions. She is passionate about user experience, social innovation, design thinking, human and women rights, mentoring. and has received the UN Human Rights Award for Civic Activism. 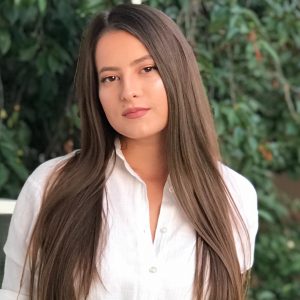 Mersiha Jaskić from Bosnia and Herzegovina is a representative of the partner organization Centre for Civil Society Promotion. She holds a bachelor’s degree in International Relations and European Studies and a master’s degree in Security and Conflict Management. Although her primary expertise lies in security related questions and ethnic conflicts, Mersiha’s true interest is in gender related issues, gender equality, and public procurement processes. Thus, she has completed various trainings regarding gender equality, gender responsive budgeting, corruption in the public sector, and spent a trimester at Erasmus University’s International Institute for Social Studies in The Hague, studying Gender, Human Rights, and Conflict Studies: Social Justice Perspectives. As a part of an undergraduate internship in a local whistleblowing NGO, Mersiha published a paper on the “Budget Transparency of Local Self-Administrative Units in Bosnia and Herzegovina”.