On January 26th, 2022, GBWN in the framework of the “Gender Responsive Budgeting in the Western Balkans and the Republic of Moldova” project, supported by the Austrian Development Agency (ADA) and the Swedish International Development Cooperation Agency (SIDA), organized the third webinar titled “Ensuring Equality – Gender Responsive Public Finance Management and the Role of CSO”.

The goal of the webinar consisted in discussing public expenditures and financial accountability, also known as PEFA, specifically the supplementary framework for assessing gender-responsive public financial management and the role CSOs can have in enhancing the application of this methodology in the Western Balkans and the Republic of Moldova.

The webinar was opened and moderated by Ms. Nicole Farnsworth from the Kosovo Women Network who also gave short introduction on Public Expenditure and Financial Accountability (PEFA)’s essence and its role. 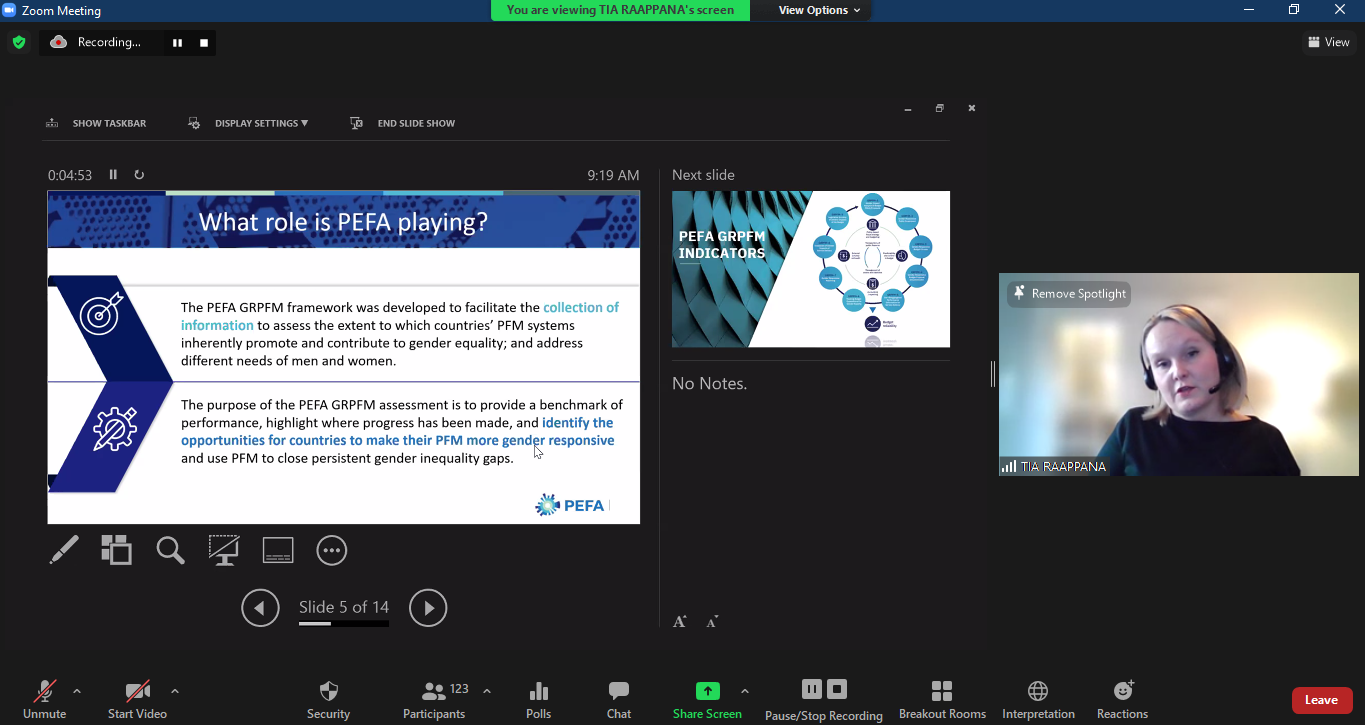 Mrs. Tia Raappana, the representative from the PEFA Secretariat was the first speaker. She introduced the PEFA supplementary framework for assessing gender responsive public financial management saying that it was developed to facilitate the collection of information to assess the extent to which countries’ PFM systems promote and contribute to gender equality, as well as to address the different needs of men and women. She added that the purpose of the assessment is to provide a benchmark of performance by highlighting the progress made and identifying the opportunities from countries to make their PFM more gender-responsive in order to close gender inequality gaps.  She strongly encouraged Civil Society Organizations (CSOs) to use these tools as a way of having a dialog and looking at practices from around the world. To make the topic less abstract, Ms. Raappana shared the 9 GRPFM indicators and emphasized the importance of linking GRPRM with the budget cycles – Budget Preparation Cycle, Budget Execution cycle, Accounting and reporting cycle and External scrutiny and audit.

Next in line was Mrs. Maja Bosnic, representative from NIRAS International Consulting and second speaker. She introduced the participants with good examples from GRB implemented projects in Ukraine and Indonesia, as well as the contribution coming from the local CSO.s However, her key messages were directed towards the opportunities for improvement of the PFM in regards to gender component such as expanding the collection of sex-disaggregated data and their inclusion in budget documentation which would allow the Government to facilitate discussions on the impact of its programs and services, higher focus on gender analysis as a basis for GRB statement, tracking budget allocation for gender equality and considering including a report on the current status on gender equality, a statement of government priorities for improving gender equality, or details of expenditure and revenue measures aimed at strengthening gender equality. 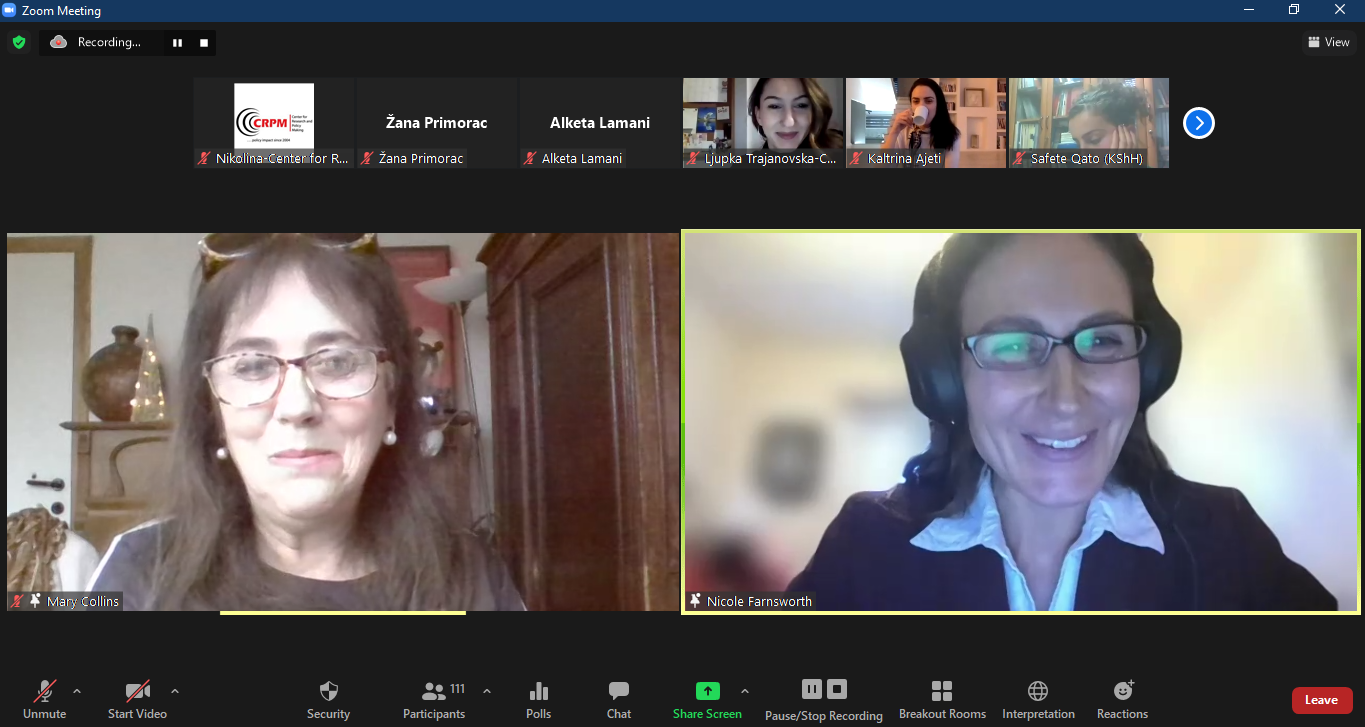 As a last speaker we had Mrs. Collins from the European Women’s Lobby who stressed that gender budgeting is not mainstreamed systematically but rather it is still experimented on and this has been going on for far too long. She also stated the importance of conducting gender-responsive budgeting by reminding everyone present in the webinar, that no country in the European Union (EU) or anywhere around the world has achieved gender equality. According to the Gender Equality Index, of The European Institute for Gender Equality (EIGE) indicators shows that on a scale of 100, the EU scored 66 points. This really tells the pace is very slow and it will take us 60 years to achieve Gender Equality, therefore there is an urgency to move ahead. Mrs. Collins also addressed the impact of the COVID-19 pandemic and how it made women’s role in upholding society visible, but also the massive inequalities worldwide between men and women such as the amount of unpaid care work, work in households, etc. 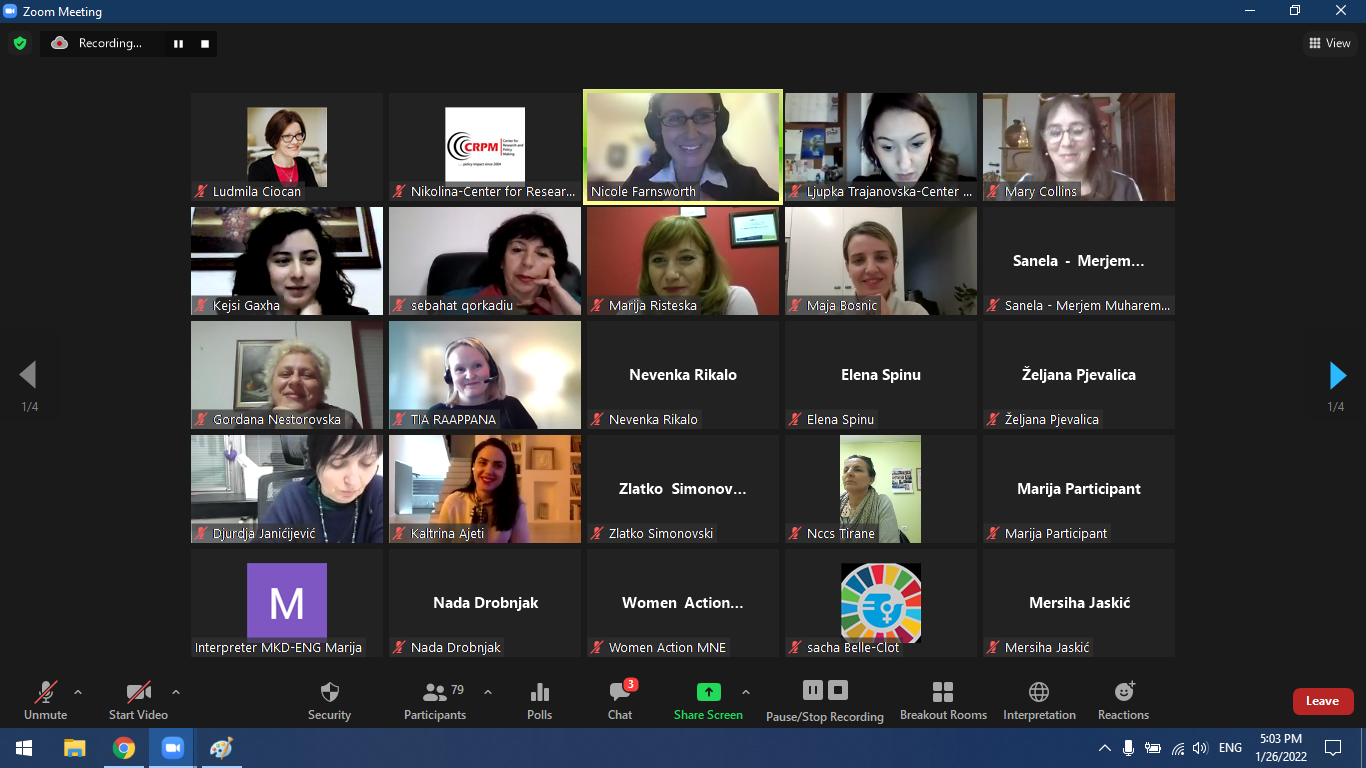 Afterwards, a discussion and Q&A followed. The comments and questions were mostly related on the similarities with the PEFA supplementary framework and the 5.C.1 SDG indicator, the role of EU’s institutions in regards to enhancing the GRB as well as applicability of the monitoring schemes on local level(s).