More than 100 participants took part at today’s Gender equality and climate change webinar, organized in the frames of the “Through gender lenses” project, funded by the European Union and Gender Budget Watchdog Newton for Western Balkan and Republic of Moldova, supported by the Austrian development agency and the Swedish International Development Cooperation Agency. NGOs, associations and organization from the Western Balkan region and Republic of Moldova increased their understanding of linkages between gender equality, gender transformative actions and climate change response and discussed the approach to gender responsive budgeting watchdogging in climate change actions funding. 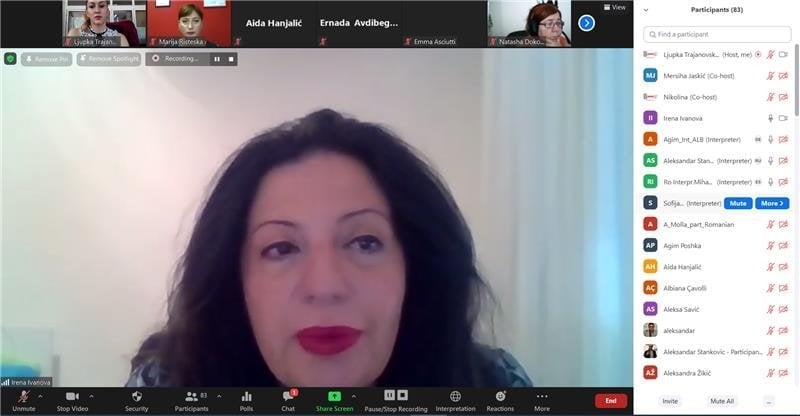 The event was opened by the project director Marija Risteska and Irena Ivanova, task manager at the EU Delegation in North Macedonia. Risteska said that the gender equality in the climate change sector in under researched, especially the role of CSOs in this intersection and this webinar should be used to boost the dialogue in that direction and highlight the different needs and consequences that gender climate imposes to genders. In her introductory speech, Ivanova stressed that this regional approach should bring results in brainstorming new ideas and approaches where gender equality component will be infused in the forthcoming project supported by the EU. She also said that women can play significant role in tackling climate change and climate mitigation bearing in mind that in the existing setup in the region women they play the role of first line educator to their children who can help in awareness raising and values educating. 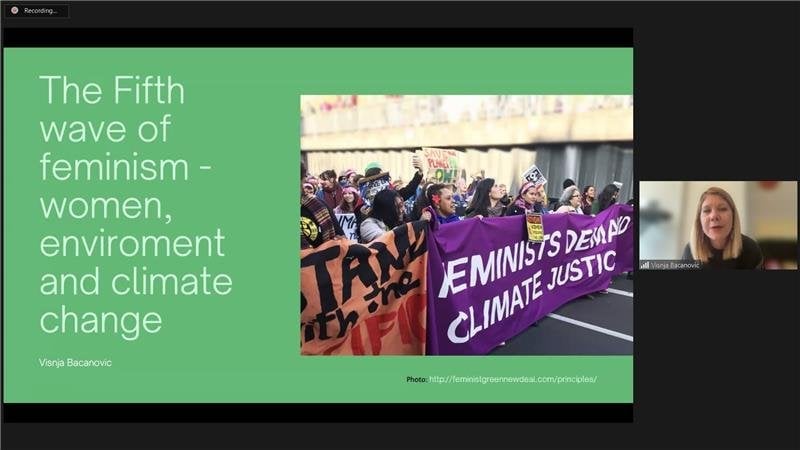 Visnja Bacanovic as a first speaker introduced participants with the gender and climate change burning issues, such as agriculture and land use, decision making, subsidies and unpaid work which produce inequalities and transformative responses needs to come from the respective authorities. She also referred to the gender analysis, GRB monitoring and advocacy as a tools to overcome existing gaps. She highlighted that feminist green deal and boosting eco feminism is also a solution to these phenomena. Jana Angelovska addressed on the climate change response policies and Green Deal and introduced the present participants with the Kyoto Protocol as well as the Paris agreement, as well as on the current challenges that North Macedonia faces in terms of meeting the international pledges. As a following speaker was introduced Mihallaq Qirjo, Director of Resource Environment Centre from Albania, who referred to two researches on water management and biodiversity. In the National Biodiversity strategy since 2015, their research shows gender blind language and provision, which is not the case with the National Strategy for Integrated Water Resources management where significant improvement is visible. This has been done via word screening and monitoring. His main points were that higher representation of women in the policy dialogue is more than needed, alongside increasing opportunities to engage, access to financial resources and improving productivity. As a last speaker, Emina Veljović from the Aarhus centar from Bosnia and Herzegovina presented the case of the Kruščica River where feminist activism was crucial ins toping the construction of a hydro power plant on the respective river and preserving the environment. She stressed that efforts now are directed towards sustainable and concrete legal changes that will provide strict regulation in preventing building in protected areas.

As a concluding activity, a discussion forum was moderated by Ljupka Trajanovska, researcher at CRPM at which participants discussed on the role of civil society in monitoring climate change financing, tracking climate change financing modalities in contributing to greater or smaller inequaloties, necessary competences that CSOs need to have in that respect and the challenges we for successful monitoring from gender perspective.