The Gender Knowledge Hub, within the GBWN project, prepared a Gender Analysis of the Budgeting of COVID – 19 Response in the Republic of Serbia. The focus of the analysis, in addition to the gender responsiveness of measures, was on transparency and participation of women’s civil society organizations (WCSOs) in the State’s response to the pandemic. 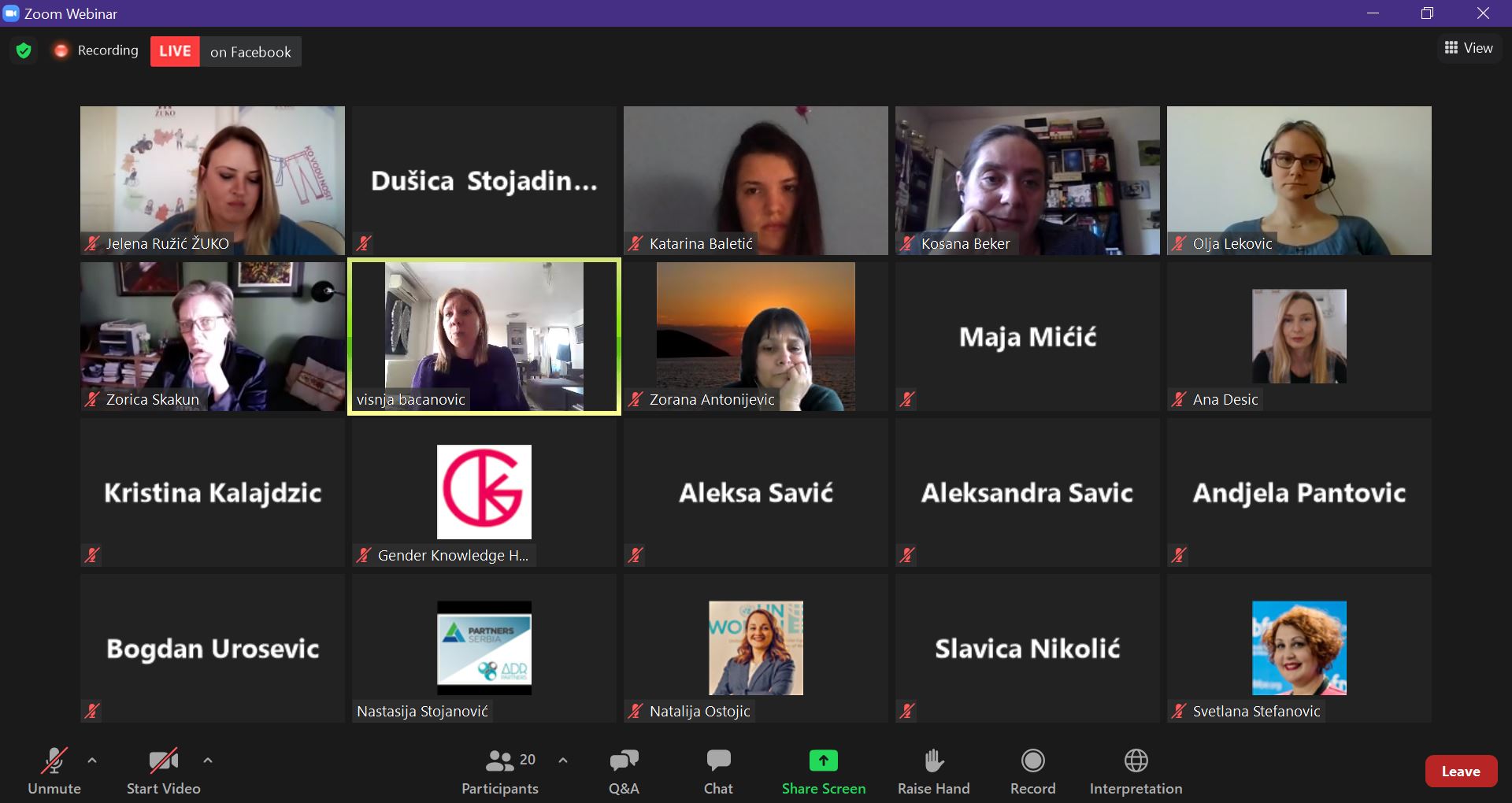 The analysis showed that: the response to COVID – 19 in Serbia wes timely, but that it was gender blind in general, while single measures were gender blind or gender neutral. Most funds are allocated to support the economy, without targeting specific sectors or without specific measures for women. There were no state measures, funded from the budget, that were aimed at the key gender needs of women and vulnerable groups.

WCSO, on the other hand, from the very beginning of the pandemic conducted analyzes, were preparing recommendations to the competent institutions, and some of them are providing and establishing services for women in local communities.

These and other key findings of the analysis were presented at an event held on the Zoom platform on March 31, 2021. The event brought together representatives of numerous organizations, both domestic and international. At the outset, Sabine Kroissenbrunner, Deputy Ambassador of the Republic of Austria, and Marija Risteska, Regional Director of the Gender Budget Watchdog Network project, gave opening remarks and emphasized the importance of gender responsive budgeting and the role of civil society organizations in the process. Then, Višnja Baćanović, director of GKH presented the results of the analysis.

The second part of the event was dedicated to the experiences and response of WCSOs. Jasna Kolaković Smiljanić, a representative of Fenomena Association from Kraljevo, Kosana Beker, program director of Femplatz from Pancevo, and Jelena Ružić, president of the Association of Women of the Kolubara District, presented the activities of their organizations during the pandemic. Jasna spoke about the analysis of the institutional responsible to violence against women in the state of emergency and pandemic, and the guidelines that they prepared to the competent institutions regarding the protection of women. Kosana spoke about the results of the research on the position of women with disabilities and older women conducted by the Femplatz. Jelena Ružić spoke about the Octopus program implemented by the Association of Women of the Kolubara District, which includes various services for women from predominantly rural areas. Their presentations were followed by a discussion in which, in addition to the speakers, Katarina Baletić, a journalist from Nova ekonomija, Olja Leković, a representative of Unwomen, Zorana Antonijević, the OSCE, Bogdan Urošević, the OSCE Mission to Serbia, participated. 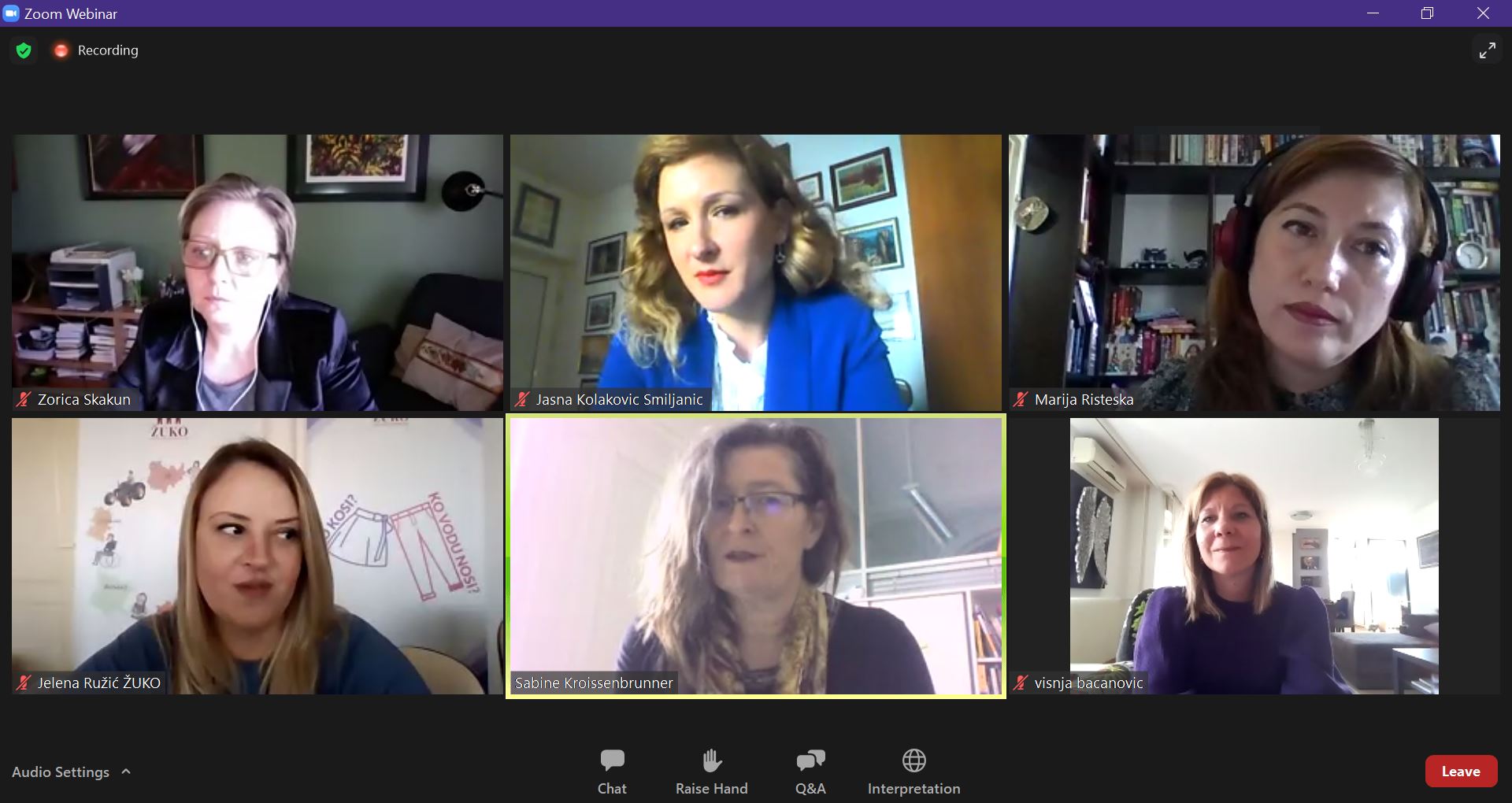 It was concluded that it is necessary to involve more women’s organizations in decision-making, and to incorporate the recommendations they are preparing into the design of the measures that are being adopted. It is necessary to inform the competent parliamentary committees about the findings and to continue with independent monitoring of recovery measures.

The discussion was moderated by Zorica Skakun (KANA organization). A recording of the event is available on the FB page of the Gender Knowledge Hub, and the analysis in Serbian (and summary in English) on the organization’s website www.genderhub.org.r s and the website of the network www.gbwn.org