The Center for Research and Policy Making within the project “Gender Budget Watchdog Network in the Western Balkans and Republic of Moldova”, financially supported by the Austrian Development Agency and the Swedish International Development Cooperation Agency, on 25th of February 2021, presented the  gender fiscal analysis entitled “Dealing with COVID- 19: How does public spending affect gender equality?”. 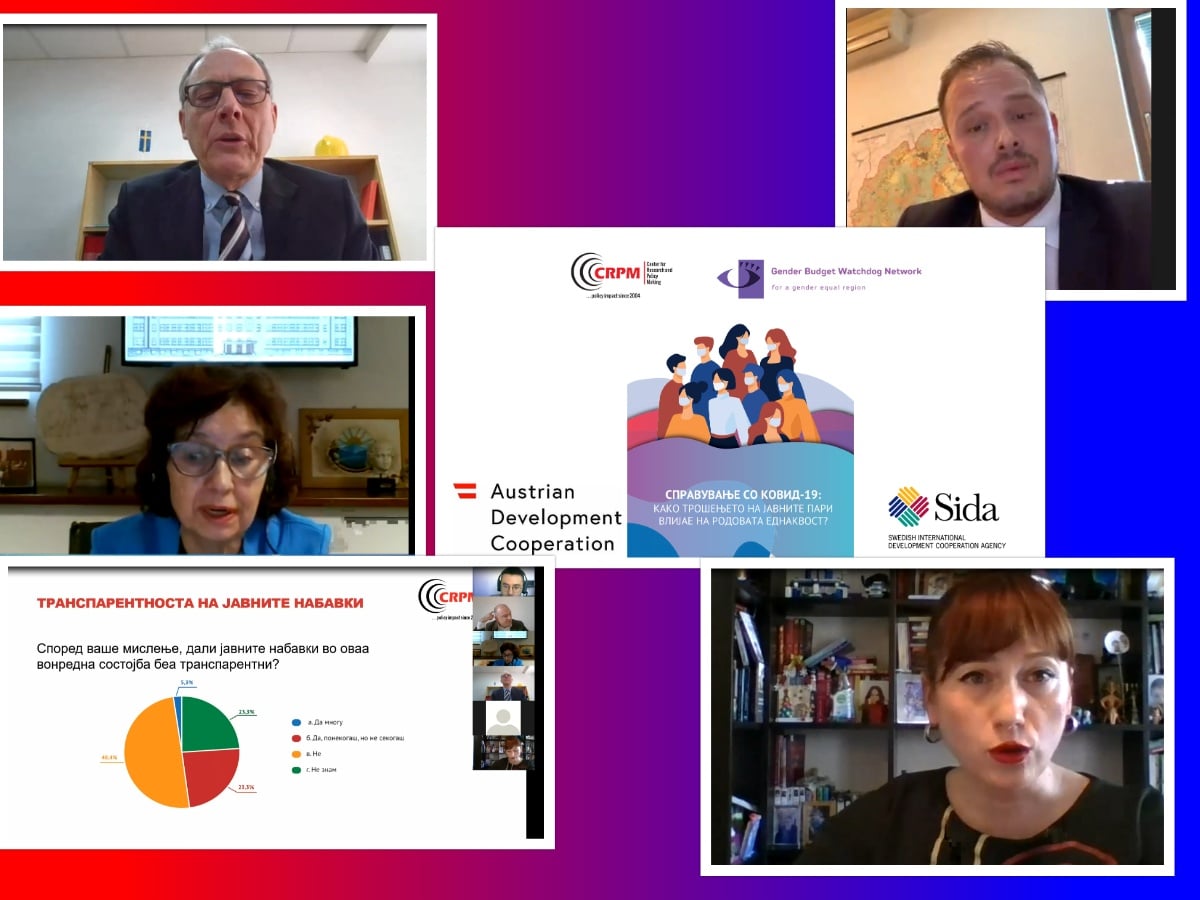 At the opening of the event, introductory speeches were delivered by Lucas Bahmeyer, Deputy Ambassador of Austria in Macedonia as well as Michael Aterhög, Head of the Development Cooperation Department from the Embassy of Sweden. Both pointed out that the crisis caused by covid-19 further deepened the already existing gender gaps in society. Deputy Ambassador Bahmeyer highlighted that the crisis has contributed to an increase in gender-based violence and women’s care in the family, so gender-responsive budgeting should be seen as a key tool for achieving gender balance. On the other hand, Mr. Aterhög pointed out that gender equality is a top priority of the Swedish government, and thus of the aid that comes from there. In these times of challenge, he said, it is important for governments to ensure that international human rights and standards are met, while ensuring visible transparency and inclusiveness in the development and implementation of measures as a response to the COVID-19 crisis. The Chairwomen of the Committee on Equal Opportunities of the Macedonian Parliament, Gordana Siljanovska Davkova was also present at the presentation who noted that the study clearly demonstrates that women are more affected by the crisis compared to men and that the state aid first went to large and profitable companies, and afterwards to vulnerable citizens. According to her, the Women MPs Club and the respective committee are excellent tools for overcoming inter-party constraints, and thus solving basic human needs.

Presenting the main findings, Riste Jurukovski, who was involved in the design of the study as an independent researcher, stressed that the measures did not contribute to maintain women’s economic activity and that most of the burden of children and the family care goes on their shoulders. Namely, out of 46 analyzed measures that may have a gender dimension, and were intended for coping with the COVID-19, only 14 of them can be considered as gender-positive, and only two gender-transformative. Additionally, Jurukovski said that the dismissals are more numerous among women, and the ones most affected are those in the South-East region, primarily from service delivery activities. He also mentioned that the majority of non-governmental organizations (53.7%) believe that women were not consulted at all during the design of the measures, and that the measures partially responded to the needs of men and women. The findings, added Yurukovski, indicate that 48% of CSOs claim that public procurements were not transparent and they did not grasped the gender component in the selection criteria listing.

Marija Risteska, GBWN project leader and CRPM executive director, focused to the conclusions and recommendations, pointing out that the authorities are obliged to publish fiscal reports on the spending occurred to deal with COVID-19 crisis, which should include a gender perspective too; the State Audit Office needs to start implementing the so called “Gender audits” in order to give a clear picture of the effectiveness and the impact of the implemented measures and the budget expenses. In the development of measures for the period after the crisis, Risteska appealed for mandatory and active inclusiveness, where gender equality as a component will be an integral part of the overall process. She also noted that all institutions should provide and maintain gender-disaggregated indicators in order to properly analyze the situation and develop measures and policies in accordance with the real needs of men and women.

A discussion followed mainly focusing on the impact of the crisis on the non-declared workers as well as the huge gap of the state aid delivered to sports persons and the mechanisms that are available in the framework of the Committee on Equal Opportunities for overcoming the current challenges.